How can Spymaster Pro Help to Counter the Dangers of Live Streaming? 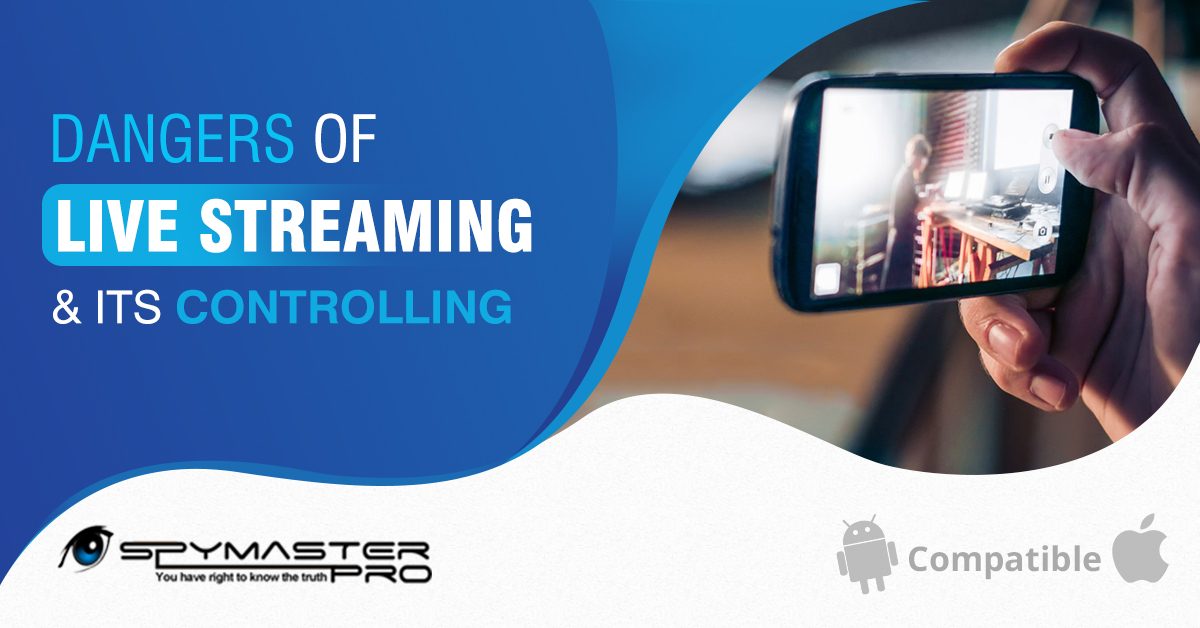 
The term ‘Live streaming’ is nothing sinister, but that hasn’t stopped the Internet from making it so. But the dangers of live streaming video are very much a fact and causing significant harm to many people in the world.

Videos on social media generate 1200% more traffic than texts and images, according to Livestream. This incredible number attracts the wrong kind of crowd, unfortunately, to target innocent users.

Live streaming is a phenomenon that is taking the world by storm and is attracting advertisers too because of the number involved. After all, 74% of millennials found the video helpful when comparison shopping. So, naturally, there are dangers involved, along with the benefits.

Some well-established dangers of live streaming sites are:-

Kids are using the Internet on their mobiles without adult supervision. It is a reality which parents didn’t have to worry about before. But kids don’t think much about what harm a content might cause. As such, a cell phone monitoring software is needed to keep a close eye on such online dangers.

The biggest threat of a live streaming site is that once it begins, then anything goes. People have also interrupted live streaming with drug use, profanity, and nudity. Such inappropriate videos can have far-reaching consequences on a young and impressionable mind.

Unfortunate, such incidents getting streamed live are widespread in India too. Acts of live streaming suicides are sadly on the rise. A few examples below:-

– On a quiet Sunday this year, on August 11, Shubhankar Chakraborty, a DMRC employee streamed his suicide act live on Facebook by hanging himself in his rented house in New Delhi with two words, ’I quit.’ before committing the act.

– On April 24, 2017, a 20-year-old Thai father because of jealousy first killed his 11-month-old daughter and then killed himself because he was jealous that of the suspicion that his girlfriend had other boyfriends.

Kids are also live streaming in huge numbers nowadays. If there are no privacy controls on the streaming, then there is no saying who might be logged in and watching the live stream. The danger of live streaming video is that kids don’t pay attention to the risks. They may end up exposing private information from their house that robbers use to determine if the family will be at home to loot the house of very costly belongings.

Live streaming sites like TikTok, and now that feature is available in hugely popular social media sites like Instagram, Facebook, Twitter, etc. What that does is exposes kids to sexual predators who site online to target teenagers. Having a parental control tracker can be hugely beneficial here.

The risk of not choosing parental software can be that it will be either manipulated or forced to perform sexual acts online. In the UK, children’s charity warned they supported 19 children who had suffered online sexual exploitation aged 8 while in 2018, the kids needing help were aged 10.

Front cameras have become a primary source of headaches for many individuals as hackers continue to hack front cameras.

They create a personal video of their intimate and private moments with malicious intent. But if you suspect that your front camera is hacked or about to be there are some precautions to be taken to avoid any untoward incident:-

– Use the camera only on a secured internet connection.

– Remember to keep the software, browser, and operating system updated.

– Try to put tape over cameras when not in use.

– Avoid clicking on suspicious-looking links and chatting with strangers online.

– Make sure the front camera gets turned off when not in use.

How will Spymaster Pro help in Controlling the Dangers of Live Streaming?

Spymaster Pro is a highly trusted parental monitoring software. It is effortless to download and use even if you are new to technology. It will cause no icon on the home screen or any notification sound. You can also keep your mobile under monitoring to ensure that you are broadcasting sensitive, private information to people unknowingly.

As a parent, it is always useful to track kid’s web browsing activities to ensure they are not under harm from such online dangers. You can go to social media and web browser history logo to monitor the content they viewed online. Live screen-shots will also provide you information on what activity is going on your mobile or someone else.

Live streaming is so widespread that it is tough to avoid it, but what you can do is take precautions. The dangers of live streaming are something that can harm anyone at any time. So, it is critical for the whole family always to be aware and using tracking software to keep a close eye. It will help you and the kids stay safe.

How to Track Telegram Messages?

Do you find your kids browsing multiple apps...